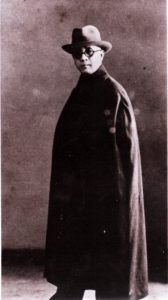 Chen Pan Ling was born in1892 ,is an educator and a martial artist. He graduated from Peking University in 1921. He founded education, committed to irrigation work . He has a great contribution to the country, often receive government awards, medals. He spent his entire life studying and teaching Chinese martial arts. He specializes in four kinds of martial arts: Shao Lin , Xing Yi, Bagua, and Tai Ji. During the 1939’s, he was involved in the Central Guoshu Institute as a vice president and chaired a committee charged with collecting traditional martial arts and developing standardized forms and practices. Edited more than fifty kinds of textbooks, wall charts for more than fourty pieces, in fact, unprecedented in the history of martial arts.

Chen Pan Ling spent the remainder of his life in Taiwan where he was considered one of the preeminent masters of his generation. Until his death at 77 in 1967, Chen Pan Ling was without doubt more knowledgeable on the principles, rationale, and practice of Chinese Martial Artst. He deserves our respect and remembrance.